173: Dr. Amir Sabouri on the Human Side of Medicine

This will be our last podcast of 2019, so we wanted to make it something special. We also want to thank all of you for your support over the past year, and wish you all the very best in 2020!

Thanks to all of you, we surpassed 1.5 million downloads this year, and will likely hit 2 million in the spring of 2020. If you like the Feeling Good Podcasts, please tell your friends and family members, as word of mouth is our best marketing by far. In addition, if you are a member of any mailing lists, send them this link to the list of all the Feeling Good Podcasts. On any given day, 30% of human beings are feeling depressed and / or anxious, so you'll be doing lots of  people a favor, since the podcasts, as you know, are entirely free.

We are joined today by Amir Sabouri, PhD, MD, a highly esteemed neurologist from Iran with extensive medical training in the United States in addition to his PhD research in molecular immunology in Japan. Amir specializes in the treatment of horrific neuromuscular disorders such as ALS (the dreaded Lou Gehrig's Disease) at one of our local Kaiser Hospitals here in the San Francisco Bay Area. In today's riveting and inspiring interview, Amir describes how he discovered that, in spite of his extensive technical training, his strongest and most effective medicine by far is sometimes a healing dose of humility and compassion, delivered with the Five Secrets of Effective Communication.

We are also joined by our wonderful host, Dr. Rhonda Barovsky, as well as my friend and neighbor, Dave Fribush, who has joined many of our podcasts recently, as well as Steve Reinhard, a certified coach and TEAM-CBT therapist who flew in from Colorado for the Sunday hike and podcasts. Steve will be the featured guest on next week podcast, along with his wife, Barbara, on the topic of "Sadness as Celebration." 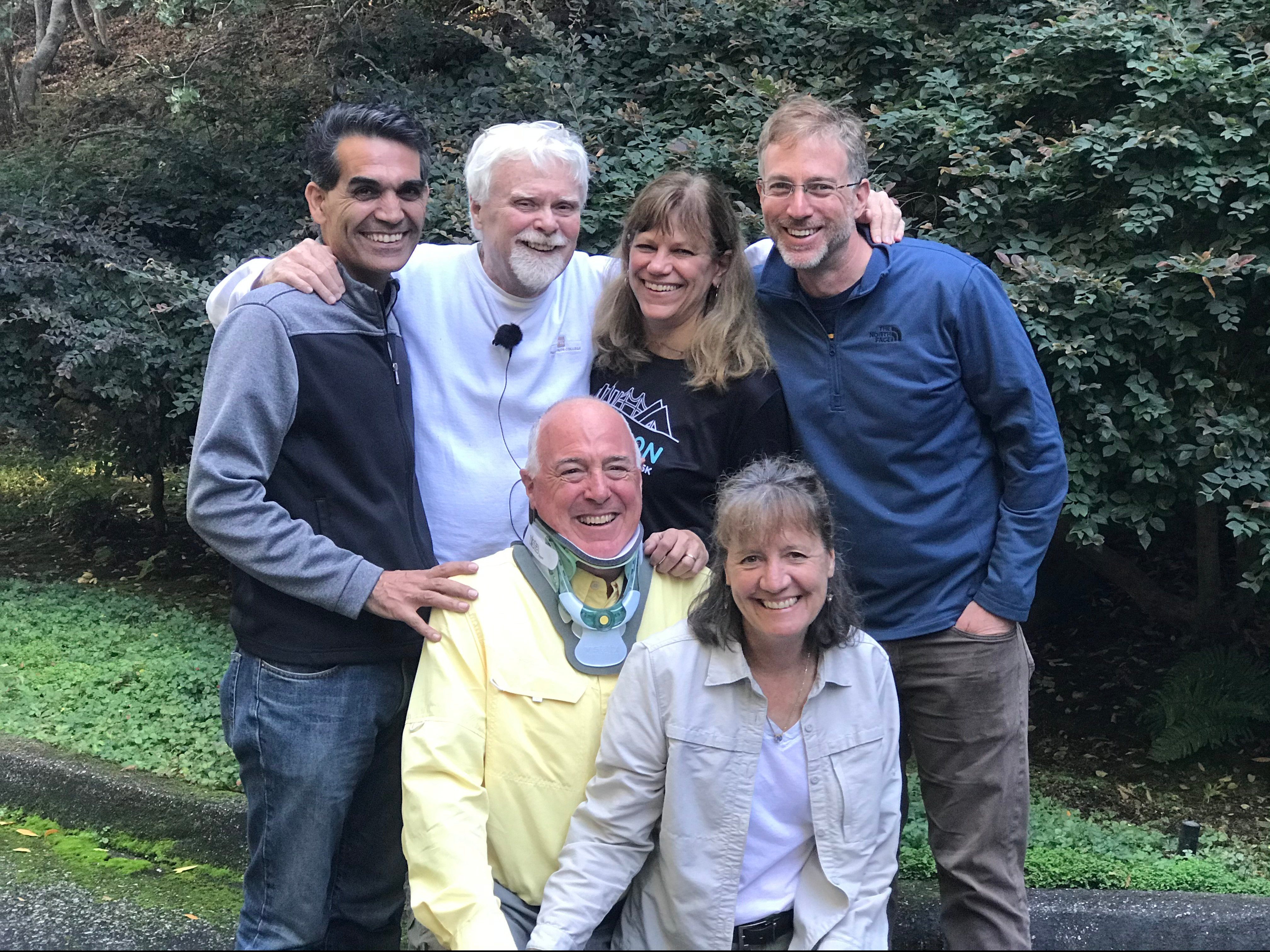 Amir and I have had a friendship and professional collaboration that goes back several years, when Amir first joined one my Sunday hikes, along with his wife, Dr. Sepideh Bajestan, PhD, MD, who was one of my students during her psychiatric residency at Stanford. In the past couple years, Amir has attended the Sunday hikes regularly and has worked hard to learn and master TEAM-CBT, especially the Five Secrets of Effective Communication, which have begun to play a huge role in his clinical and professional work.

Amir begins with a description of the first time he did personal work on one of the Sunday hikes.  At the time, Amir was struggling with feelings of sadness, guilt and inadequacy about his role as a physician and neurologist. That's because, in spite of his incredible background training and research in molecular immunology and neuromuscular pathology, the bottom line was that he had no cure to offer his many patients he had to diagnose with incurable diseases, such as ALS, and he confessed that he often felt like a failure in his attempts to help these unfortunate patients and their families.

However, by looking at his own negative thoughts, and pinpointing the distortions in them, he was able to challenge and crush those thoughts, and accept the incredible value of the immense caring and compassion he brought to his work with his patients. The change he experienced on that hike was quite pronounced, and was arguably his first "enlightenment." It was a very moving experience for me, too.

Next, Amir tackled the Five Secrets of Effective Communication, and worked extremely hard to practice and master these techniques, which have also been invaluable in his medical work. He describes two recent patient encounters where these skills were invaluable. One involved an angry new patient who aggressively criticized Amir from the very moment he walked in the door. The many also criticized bitterly all the other doctors he'd seen. He complained that he didn't want to be there, that nobody could help, and that nobody cared about him.

Amir responded using the Five Secrets of Communication, empathizing and disarming hat the man was saying, and using "I Feel" Statements, Feeling Empathy, Stroking, and Inquiry as well. The man suddenly began to sob and share his deepest feelings throughout his entire encounter with Amir. At the end, Amir was concerned that he'd given him "nothing" other than his efforts at skillful listening using the Five Secrets, and was afraid the man might issue yet another complaint.

One hour later, Amir received a touching email from the patient, filled with praise and gratitude, and he said he felt hope for the first time! We talked about the paradox of "giving nothing," just listening with compassion, without trying to help or fix. and how this is often the greatest gift of all.

Amir also talked about his interaction with a young woman who suffered horrific complications from a powerful medication that Amir had prescribed for her neurologic problem, and Amir was flooded with guilt and fear, thinking that he had failed her and that he might get sued. But once again, his use of the Five Secrets transformed their interaction into a deeply meaningful connection.

I mentioned an experience I had as a medical student working in the medical outpatient clinic at Stanford under the direction of Dr. Allen Barbour, who wrote a beautiful book on the human side of medicine, Caring for Patients. I was assigned to a mailman who had been struggling with intractable angina, which is relentless chest pain due to problems with the blood supply to the heart. He was scheduled for one of the first open heart surgeries at Stanford. The idea was to improve the blood circulation to the heart, and the surgery was brand new and still somewhat experimental, and potentially quite risky.

While I was examining the patient, I had a hunch that something was "off," and asked the man if there were any problems in his life that were bothering him. This led to an unusual and unexpected set of events you can hear about on the podcast. Telling the story so many years later brought tears to my eyes.

After the podcast, Steve Reinhard, who had been in our "live audience" at the "Murietta Studios" today, began to cry and mentioned his own struggles with cancer. He told us how hard it has been for him to find compassionate doctors who seem to care, and how wonderful it would be if he could find a gentle, humble and loving doctor like Amir! We decided to edit Steve's comments into today's podcast as well.

High tech medicine is wonderful, and evolving rapidly, with new healing miracles every day. But the doctor's most powerful medicine, by far, is still the bedside manner, just as it has been for the last two thousand years.

The Five Secrets of Effective Communication can enrich your life, too, and can vastly improve your interactions with loved ones, friends, and colleagues. These tools can also make you more effective in the business world, or in any human interaction. Our world seems very troubled these days, to say the least, and we can all start some healing by changing the way we relate to others and learning to speak with our third "EAR," which stands for Empathy, Assertiveness, and Respect.

I hope that doesn't sound hopelessly corny, elderly, or demented, but if so, I will have to plead guilty as accused.

Thanks so much for tuning in today, and if you like these shows, please tell your friends!

If you would like to learn more about the Five Secrets, a great first step would be to read my book, Feeling Good Together. Make sure you do the written exercises while you read, and make sure you practice as well!

On the right hand panel of every page on my website, www.feelinggood.com, you'll find a Search function. If you type in "Five Secrets" or "Relationships," you'll find many helpful podcasts on this topic as well.

Learning the Five Secrets takes lots of commitment and practice. It's like learning to play the piano or learning to play tennis. You'll have to work at it. Amir is incredibly brilliant, and he had to work at, too. If you're willing to do the same thing, the results can change your life, too!

Note: As an Amazon Associate I earn from qualifying book purchases. My books are available from virtually any online or in-person book seller.