Do Negative Thoughts or Hormones Cause Postpartum Depression and Anxiety?

And What’s the Best Treatment? TEAM-CBT or Pills?

We begin today’s podcast with a lovely endorsement, and an announcement that Rhonda’s new free Wednesday TEAM therapy training group will be open to therapists from around the world and will start on December 2, 2020 at 9 to 11 AM west coast (pacific) time. Rhonda will have many fine trainers working with her, including the incredible Richard Lam, and the magnificent Leigh Harrington, to make your training experience stellar. If you are interested, contact Rhonda right away, as slots will be strictly limited. You can also fill out this form to confirm your interest!

Today, Rhonda and I are proud and excited to interview our brilliant and delightful guest, Thai-An Truong, from Oklahoma. Thai-An is an accomplished TEAM Therapist (the first in Oklahoma) and popular TEAM trainer for therapists who want to learn about these new techniques. 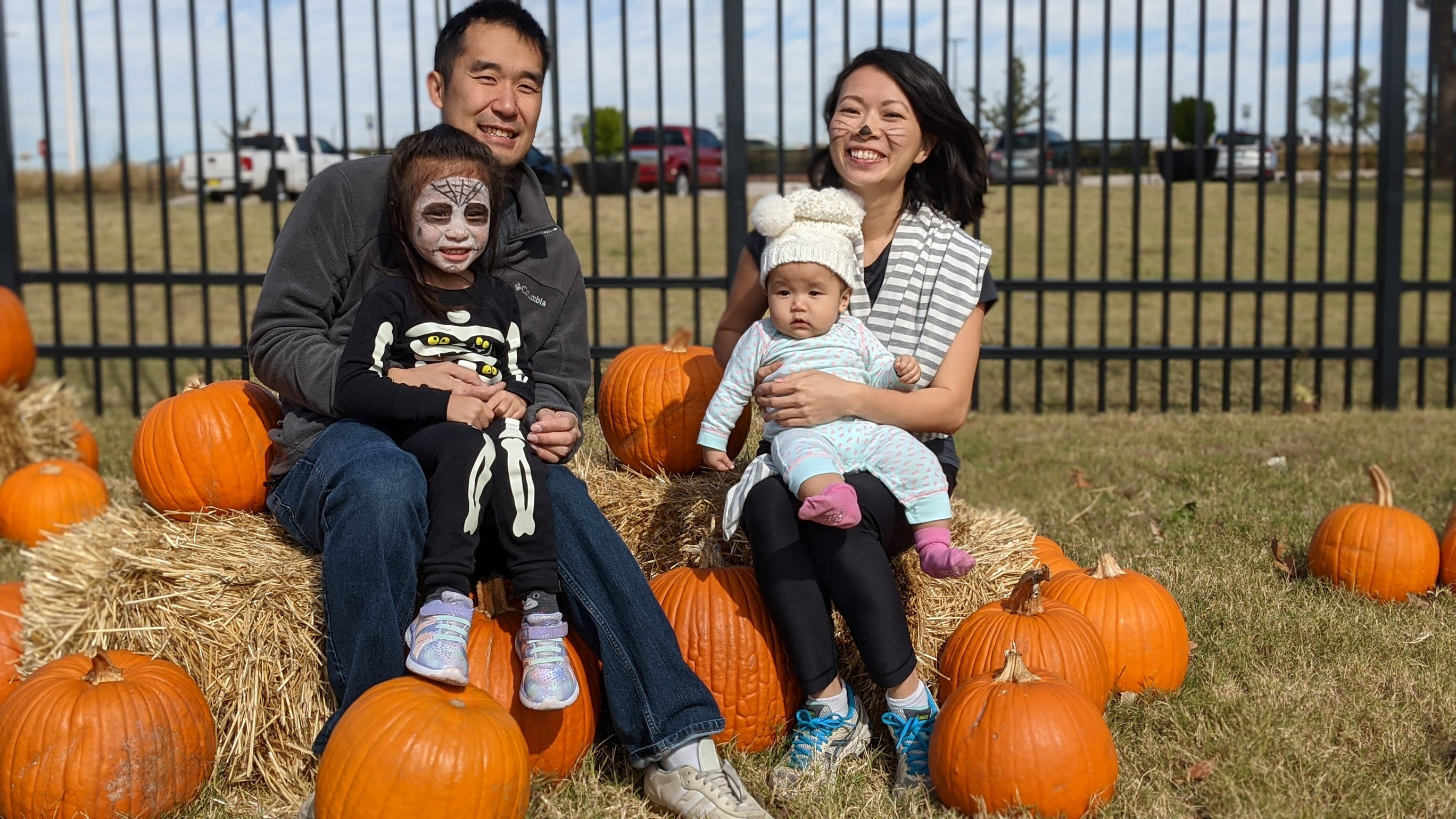 Thai-An, her husband, and two children on Halloween, the day after this podcast was recorded.
Her daughter was born earlier this year.

Thai-An’s niche is unusual and extremely interesting—she specializes in the treatment of women with post-partum depression with TEAM therapy, and usually without medications. This is extremely interesting since the world is currently focused on the belief that post-partum depression is a 100% biological disorder that results from hormonal changes, needs treatment with medications, and typically requires a year or more of treatment before improvement can be expected.

Of course, this message can unfortunately function as a self-fulfilling prophecy. And is it even valid?

No, says Thai-An. Although she sees a role for medications in some women with severe post-partum depression and anxiety, she says that the vast majority of the women she treats recover quickly without drugs. I was so happy to hear this, since my experience has been the same. In fact, Chapter 2 of my new book, Feeling Great, features my treatment of a woman struggling with severe post-partum depression who recovered in a single TEAM therapy session.

Thai-An begins by describing her own horrifying and totally unexpected battle with post-partum depression after her first child was born 4 ½ years ago. She had a wonderful pregnancy and was excited about the prospect of giving birth to her daughter, but immediately after delivery, “it suddenly felt like the rug was pulled out from under me.” She went into a state of self-loathing and struggled with extreme depression and anxiety. She says, “I could barely sleep, woke up in a state of panic, and wondered ‘can I feed my baby?’”

It got so bad that Thai-An began to think that her family and daughter would be better off without her. She said, “I even asked my mother if she’d be willing to raise her.” I felt incredibly sad to hear that, and I could barely even grasp the intensity of her suffering. The suffering of extreme depression is almost beyond human understanding, especially if you’ve never been there yourself.

Thai-An was treated with medications, including antidepressants, but they didn’t help and made her more anxious. Then was told that these side effects are “expected” and advised to “wait it out.” She said, “I saw how devastating post-partum depression is—it robs you of joy.” They told me it was biological.

One theme of Thai-An’s depression was her belief that moms are supposed to bonded to their children and loving at every moment, so “I asked myself, ‘did I make a mistake? Am I a monster? Why don’t I feel that way?’”

Fortunately, Thai-An recovered after 3 months, and decided she wanted to work with other mothers with similar problems. She now has a thriving practice in Oklahoma. Rhonda asked how other doctors view her work, since Thai-An’s treatment approach—TEAM—is so radically different from current treatments that emphasize biology. Thai-An said the doctors have become extremely supportive when they see fabulous results in the patients they refer to her.

Thai-An emphasized several components of TEAM-CBT that have been especially helpful to the women she treats.

Of course, that never works and always makes the symptoms worse. Exposure, techniques like Cognitive Flooding—leaning into the fantasies and surrendering to them—can often be rapidly curative, but requires great courage on the part of the therapist, as well as the patient. Sadly, 80% of American mental health professionals avoided Exposure, wrongly thinking it will be “too dangerous” or that the patient is “too fragile.”

Therapists like Thai-An, with expertise in Exposure and the courage to use it, are treasures, or “healers,” because they can often cause almost unbelievably rapid recovery and freedom from horrific fears.

I, David, resonated with all of these themes, having seen nearly identical scenarios in many patients I’ve treated with post-partum depression, as well as their husbands or partners. Rhonda and I both share Thai-An’s enormous enthusiasm for TEAM-CBT, and greatly admire her incredible dedication to healing.

Thai-An said that although post-partum depression is a bit more common among African-Americans as well as poor and underprivileged populations, it really affects everyone from a wide variety of social and economic backgrounds. No one is immune to this debilitating and demoralizing disorder.

Thai-An emphasized that while hormones may play some kind of role, the real and surprising culprit is perfectionism, and the expectation that things should or should not be a particular way. In other words, telling yourself that “I should not feel angry or sad,” and “I should be flooded with love and joy,” can set you up for a painful fall. These are the unrealistic expectations that trigger intense feeling of inadequacy, anxiety, and worthlessness, not only in women with post-partum depression, but all of us. I can attest to that personally!

Thai-An emphasized that recovery is not just a psychological phenomenon, but involves a deep and spiritual transformation of the patient. I definitely resonate with this theme.

Thai-An attributes her fantastic therapy skills to her many mentors—teachers she’s learned from at the Feeling Good Institute (FGI) in Mt. View, California, including Matthew May, MD, Angela Krumm, PhD, and many others. But she especially wants to honor her hero and mentor, Mike Christensen, who teaches introductory TEAM-CBT classes at the FGI. I want to second that, since I also love and admire Mike, and all of our amazing teachers and colleagues at the FGI.

Thai-An’s parents emigrated from Viet-Nam, a culture where psychiatry and psychology are practically unknown. Thai-An was “supposed” to go to medical school, but found psychology classes way more interesting than pre-medical classes. But her mom didn’t understand. She said, “Are you going to sit around and talk to crazy people al day?”

Fortunately, Thai-An stuck to her guns and went to graduate school in a mental health field rather than medical school, and the rest is history. We are SO LUCKY to know Thai-An. She is a diminutive and beautiful woman with the brain and heart of a giant! Rhonda and I both feel extremely honored to have her testimony on today’s podcast!

If you would like to contact Thai-An for training, please visit TEAMCBTTraining.com. If you are in Oklahoma and looking for treatment, you can contact Thai-An at LastingChangeTherapy.com.

Thanks for tuning in today. Next week, it looks like we’ll have another amazing guest, Cai Chen, who will also blow your mind.