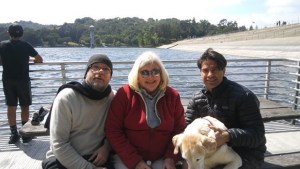 Phillip with his brother, (Paul), his mother (Maureen) and Ladybug (Labrador).

Phillip Lolonis joins us again with vital information we forgot to explore in his first podcast two weeks ago. Phillip's interest in the treatment of schizophrenia stemmed from his relationship with his brother, who suddenly and unexpectedly developed schizophrenia when he was 19 years old. and Phillip was 26, One of his motivations to become a therapist was his anger and disillusionment with the treatment his brother received that was medication focused and somewhat formulaic. Phillip thought the impact was somewhat detrimental.

In today's podcast, we explore how to use the Five Secrets of Effective Communication, and especially the Disarming Technique, in interactions with individuals with schizophrenia. This can be difficult and challenging, because many of the things the patient says are delusional and can't possibly be true, like "I know you're plotting against me!" And yet, as David points out, if you listen to the "music" behind the words, you will see that the individual is saying something that's absolutely true. He or she is just expressing feelings in a symbolic manner. And if you find the truth in what the person is saying, he or she will nearly always calm down and feel heard and respected.

Rhonda, Phillip and David demonstrate this in role-playing, using statements like "You're against me!"

David recalls his treatment of an angry young university student with severe paranoid schizophrenia who responded beautifully to Dr. Stirling Moorey, a (then) visiting medical student from London who was doing cotherapy with David so he could learn the then-new cognitive therapy. Stirling used the Disarming Technique when the young man insisted that the police were trying to prevent him from seeing John the Baptist who had secrets about the spiritual human of the human race. When Stirling expressed interest and found truth in what the young man was saying, there were immediate and dramatic results. David described this interaction in his first book, Feeling Good. Phillip said he's experienced similar things with his brother, and that this new way of communicating has been helpful.

Rhonda commented that we've had many podcasts recently on the Five Secrets of Effective Communication. These techniques are very challenging to learn, for technical and human reasons, but incredibly rewarding if you're willing to learn them and let your "ego," or "self," die.

Phillip asked us to add these comments to the show notes:

I'd like to add that the place that has been a godsend for my brother and our family is called the Putnam Clubhouse he regularly attends but not during covid,  it's tough on everyone especially the severely mentally ill, in terms of isolation.  They do have zoom meetings and come by members' homes to deliver food and goodies during covid.   It's a place that provides socialization, work, gatherings with music/poetry and outings like going to a baseball game.

Rhonda asked me the question if have I ever been afraid of my brother. That was a good question, Rhonda and I didn't answer very well. Only once in the 20 years of my brother's disease have I been afraid of him.  People judge my brother as potentially violent when in fact he’s terrified daily because of the violent voices towards him he hears.  My brother is stigmatized by the world as dangerous when the facts state that most people with schizophrenia are preyed upon, like my brother has been over the years---people taking his money, people crossing the street to avoid him, people calling the police on him, etc.  When he is upset or angry, and I respond with 5-Secrets, especially a strong  "I Feel" Statement, his rage softens immediately.

Your question itself, "was I ever afraid?" is a misnomer. Here's a better question: Is my brother afraid? Yes, every day he's afraid of being misunderstood, stigmatized, hospitalized by the police (5150) but mostly he is afraid of the voices hurting him. And my mother and I are afraid someone will eventually hurt him, or he will take his own life because he has stated that he has done enough over the years to defeat the voices but they won't go away.  So at times he feels hopeless.