Last week we presented the first half of the session with Michelle Wharton at the Live Therapy workshop on May 16, 2021. Michelle had been struggling with years of intense public speaking anxiety, especially in professional settings. So far, we’ve commented on the T = Testing and E = Empathy portions of the session. Today, we present the exciting and inspiring conclusion of that session.

A = Assessment of Resistance

At the end of the moving and tearful empathy phase, we asked Michelle about her goals for the session, which included

After Michelle said she would be willing to press the Magic Button to achieve all these goals instantly, with no effort, we suggested a round of Positive Reframing so we could see what might be lost of she suddenly achieved all these goals.

You can click here  to review the Positive Reframing that we did together, as well as Michelle’s Emotions table at the end of the Positive Reframing. You can see her goals for each emotion when we used the Magic Dial. The idea is to dial each feeling down to a lower level that would reduce your suffering, while still allowing you to preserve all the awesome things about you!

The Positive Reframing is one of the unique aspects of TEAM-CBT. Although we are encouraging the patient to keep the symptoms, the Positive Reframing typically eliminates or drastically reduces the patient’s resistance to change, and opens the door to the possibility of rapid recovery. This will be true even if the patient has been struggling with a problem unsuccessfully for years or even decades, as was the case with Michelle.

We asked Michelle what Negative Thought she wanted to work on first, and she chose #5: “People will think you are selfish and self-preoccupied.” She believed this thought 100%.

First, we asked Michelle to identify and explain the cognitive distortions in this thought. As you can see on her Daily Mood Log (LINK), she found all ten distortions.

Of course, the most prominent distortion in this thought is Mind-Reading. That’s because Michelle thinks she knows how other people will be thinking and feeling about her when they find out about her intense public speaking anxiety. This distortion is nearly always present in any form of social anxiety.

I know this from my clinical work and personal experience, since I have personally suffered from at least five forms of social anxiety, including extremely public speaking anxiety, when I was young. You feel absolutely certain that you’re flawed and that people will judge you!

Then we challenged the Negative Thought, and Michele she was able, with a little help and a couple of role reversal, to crush it. Take a look. (LINK)

Here were Michelle’s reflections on that portion of the session.

First we used the Double Standard and I think that’s when I said this to the imaginary friend with the exact same problem: “I think you’re being kind of brave.”

Then it evolved into Externalization of Voices. Both David and Jill played the negative Michelle and I had a little difficulty talking back to my Negative Self. I connected on a logical level, but didn’t yet have the ammunition or determination I need to blow my Negative Thoughts out of the water.

David spotted my ambivalence immediately, and suggested that maybe it wasn’t something we should work on. Before he made that comment, I didn’t even realize that I had mixed feelings about giving up my intensely self-critical thoughts.

At that point, I found myself making the decision to fight back and felt myself getting stronger. The next time David (as the Negative Michelle) asked if he could talk to me for a minute I told him he had only 30 seconds to make his point because it was time to back off. I had some hesitation about only using the Counter Attack to defeat the thought but David said he liked the feisty response.

Then David and Jill both told me of all the positive feedback that was coming through the chat, and I was given the opportunity to use the Survey Method with a couple of audience members. I think I asked two or three people if they thought I was using up valuable time, since that was one of my painful Negative Thoughts.

The both commented that they found the session incredibly helpful and that they could relate to these feelings of anxiety and shame, and that they weren’t judging me harshly at all!

Here you can see how Michelle challenged thought #9. As you can see, her belief in this thought fell from 100 to 50, and then to 0.

You can see Michelle’s Emotions table at the end of the session, after she had crushed all of her Negative Thoughts.

After the workshop, Michelle sent us this email.

I was going to write to you and tell that I would probably be happy to go ahead with the podcast but that I wanted to do a DML on some concerns about judgements as well as concerns about crossing of professional boundaries (worrying that I’m ‘oversharing’ with clients). Then, I just so happened to have supervision scheduled with Robyn Blake-Mortimer (another Level 4 therapist in Adelaide - I think she was Robyn Fowler when working in New York) this morning and she suggested we do some TEAM personal work on it. It was incredibly helpful and I’ve decided that I’d be happy for you to share the podcast, if Jill and Maor give permission.

Robyn helped me to see that there was probably (intentional distortion!) a large impact on my life from the fact that my family survived Cycle Tracy (Christmas 1974) despite our house being 99% destroyed.

Our lives were hugely affected and I (now) see a strong connection between this and the bed wetting. Which is not to say it changes the ‘ok-ness’ of the issue, rather that it helped me to see the amount of cognitive distortions that were in my worries about broadcasting the podcast (that ‘my problems should all be fixed by now’). Another liberating moment for me, thanks again to TEAM.

Here’s what was left of our house after the Cyclone - just the bathroom where we were. 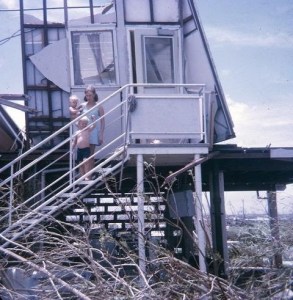 This was my response to Michelle:

Wow, Michelle, that’s fantastic, kudos, I really like the way you’ve caught the pass and you’re running for a touchdown, like a speedy wide receiver (if you follow football.) I really like all of your thinking and plans!

Also, something both of you might want to consider is if we might consider turning each session into two consecutive podcasts. People love and are helped the most by live work podcasts. This is not required, and is just a thought.

So proud of both of you!

Michelle’s scores on all the scales on the Brief Mood Survey at the end of the session were zero, and her scores on the Happiness Test soared to 100%. Her ratings of Jill and David on the Empathy and Helpfulness tests were perfect as you can see at this link.

Here’s what she wrote on the question on “what did you like the least about your session?”

"Absolutely nothing!! This was such a gift and I feel so fortunate and incredibly grateful."

Here’s what she wrote on the question on “what did you like the best about your session?”

"Addressing the ambivalence, the Positive Reframing, the warmth from you both, and how it helped me to soften into and accept these feelings."

On the audio, you will also hear the amazing follow-up interview we had with Michelle many weeks after this session.

Thanks for listening. I hope you learned a ton and were moved emotionally and inspired. Write and let us know what you think!

And thanks, too, to Michelle for giving all of us a gift that’s worth far more than gold!